Blush is Ch Showdown's First Mystik'l Blush. We bought Blush from Sandra Statter of Showdown's Kennels. She was born January 2, 2006 and is out of Ch Janhamers So Irresistabul /Ch WildHeart's Valentine Rose. More on this can be see on Sandra Wickwires site.
Blush was trained and shown by Courtney, finishing her championship at 16 months of age with some impressives wins, including a group win at 15 months of age.
Blush gave us a beautiful litter of puppies on Easter Sunday March 23, 2008.  More to come on these later.
Blush is very much retired now Oct 2015, at 9 years 9 1/2 month. Living the good life of doing anything she wants.
We showed her as a veteran a couple times with her winning best Veteran the summer of 2014. 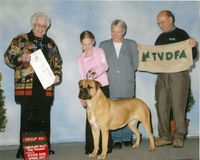